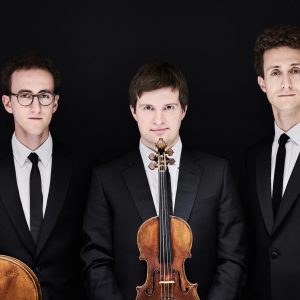 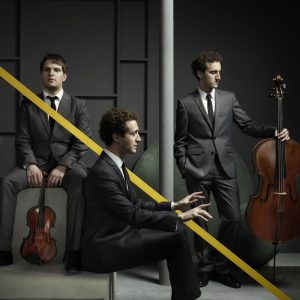 Named after the legendary violinist Adolf Busch, this piano trio has emerged as one of the leading young piano trios, receiving enthusiastic responses from audiences and critics internationally. Omri Epstein “the group’s marvellously sensitive pianist”, Mathieu van Bellen, whose “silvery gleam darted eloquently”, and Ori Epstein, with whom “you felt in the grip of a warm hug”, have all won prizes in solo international competitions. Brought together by a shared deep passion for chamber music and inspired by Mathieu’s possession of the “ex-Adolf Busch” G.B. Guadagnini violin (Turin, 1783), they have been recognized for their achievements and their playing with “incredible verve”. Since its formation in London in 2012 the trio has developed an extensive performing schedule across Europe’s leading concert halls and festivals. Their recent Wigmore Hall appearance was received to critical acclaim, The Times commenting: “…what impressed most was the group’s effortless musicianship and unity of thought and attack. The threesome even seemed to be breathing in synch.”

In 2016, the trio released their debut CD on French record label Alpha Classics of Dvorak’s trios to critical acclaim, receiving a 5-stars review in the Diapason magazine and remarked upon by the Gramophone as: “…the youthful Busch Trio can boast one of the most notable features of their namesake: a pooled decision to put the music, and only the music, first.” The CD is part of a 4-CD project of the complete chamber music for piano and strings by Dvorak. This and the subsequent two CDs, featuring the piano quartets and quintets, were selected by stations selected as CD of the week by several radio stations across Europe. This helped the trio win the 2016 Kersjesprijs, the Netherlands’ premier chamber music award.

Winners of the 2012 Royal Overseas League Competition, the trio went on to win several prizes at international competitions in Germany, UK and Italy, receiving guidance from distinguished artists such as Eberhard Feltz, Andras Schiff and the Artemis Quartet. As part of their development, the trio were based at the Queen Elisabeth Music Chapel in Brussels, where they were the trio in residence.

Recent seasons included a tour of China, Germany, France and the US, where their performance at the Phillips Collection was remarked upon by the Washington Post as possessing ‘remarkable maturity’. The trio often collaborate and most notably performed Beethoven’s Triple Concerto with the Warsaw Symphony Orchestra and Karina Canellakis and in concert with musicians such as Michael Collins, Bruno Giuranna, Gregor Sigl as well as Miguel da Silva, with whom they also recorded. Dvorak’s piano quartets CD was hailed by the Sunday Times as “an outstanding disc”.

They frequently perform on all major radio stations in Europe and next season’s highlights will include a return to Amsterdam’s Concertgebouw, a tour of the US and the release of the complete Box-set of their Dvořák project.