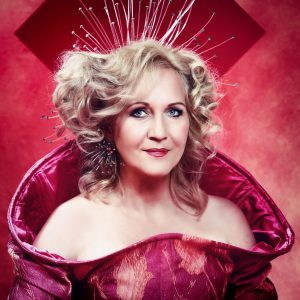 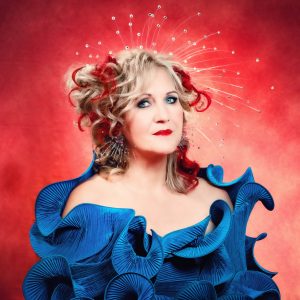 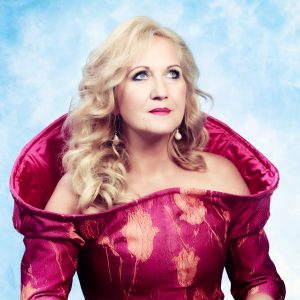 Born in Leipzig, Simone Kermes is one of the most sought after sopranos for dramatic Coloratura roles. Her extraordinary vocal range predestines her especially for virtuoso works by baroque masters, such as Handel and Vivaldi, but also for the soprano parts and concert arias by Mozart, Haydn and Beethoven. Her emphasis lies particularly in concerts, successfully touring with her own music projects. Her self-developed concept albums are produced with the record label Sony. Her recordings set no limits, being at home in all musical genres, and her albums have even hit the pop charts.

In 2017 Simone Kermes founded her own orchestra, called Amici Veneziani. After having worked for many years with the same musicians, she felt it was a necessity: “To bring together, experience and further both quality and humanity alike”.

Simone Kermes performs at major opera and concert halls worldwide. In addition to many radio and television appearances, she has recorded numerous CDs ranging from Vivaldi to Humperdinck. She has received several international awards for her solo albums, such as the Annual Prize of the German Record Critics (Jahrespreis der Deutschen Schallplattenkritik), the Diapason`Or, the Midem Award, Choc le Monde de la Musique, the BBC Music Choice, the Gramophone Disc of the Month and the ECHO KLASSIK Prize.

Simone Kermes won the ECHO KLASSIK Prize as “Singer of the Year” in 2011 for her CD “Colori d`amore”. She received the “Star of the Year” in 2012 from the newspaper Abendzeitung Muenchen and in April 2013 the “Golden Mask”, the most prestigious Russian Culture Award, for her Fiordiligi in the production of Mozart’s “Cosi Fan Tutte” at the P. I. Tchaikovsky Theatre in Perm.
read more

Her current album “Mio Caro Handel” is dedicated to her idol and pioneer, Georg Friedrich Handel. It portrays her entire career, the musical path that she has successfully undertook so far. Together with her orchestra, the Amici Veneziani, she has been showered with praises from international critics. The love began at 14. At that time she was allowed to sing “Sweet Silence, Soft Source” from the Nine German Arias at a Christmas concert. Since that time she has been enthralled by the music of Georg Friedrich Händel. The soprano Simone Kermes glows as soon as she hears Händel’s name. Outside of biographical similarities – “we both lost our fathers at the age of 12 – Händel’s works became the cornerstone of her career time and again, whether at an entrance examination at a university in Leipzig or singing at her first opera role.

After her successful albums, “Rival Queens” and the “Colori d’Amore”, with its forgotten baroque jewels, and after her excursion to “Bel Canto” and the commitment to vocal virtuosity in “Dramma”, Simone Kermes is now dedicating 16 selected arias in her “Pioneer, Guardian Angel, Idol” to Händel!

Of course, the aria that started everything must not be missing. Therefore, “Sweet Silence, Soft Source” kicks off the new CD. This is followed by excerpts from “Giuglio Cesare”, “Deidamia”, “Rodelinda” and other stage works that represent and capture the various life stages of the composer. In Rome, one of the cardinals gushed over Händel so much that he contracted for “Il trionfo del tempo e del Disinganno” and even supplied the libretto. Simone Kermes just sung the aria “Guardian Angels” from this oratorio in Cologne, one of the pivotal cities in her career. Clearly, this music also will not be missing from her new album. That also goes for “Rinaldo.” Simone Kermes admits, “A masterpiece is created for you here: ‘Lascia ch‘io pianga’ is my absolute favorite aria and is always my last encore

In the course of her successful career, she has sung almost all of the sorceress characters in Handel’s operas, including, of course Alcina, who transforms her former lovers into animals. And fittingly, the aria “Mi restano le lagrime” can be heard on her new CD. At the end is

Handel’s famous worldwide hit, “Ombra mai fu”, which has been clicked on over a million times on the internet. And additionally in the supplementary booklet, Simone Kermes explains in powerfully personal terms her special relationship to Georg Friedrich Händel, poses open questions, and confesses her dreams and memories.

For some years now, Simone Kermes has been celebrated for her riveting stage presence and her vocal virtuosity. Just in the area of concerts, she has tapped into a huge fan base with her self-developed music projects. With her concept albums, that are produced with Sony Classical, she has even stormed the pop charts.

In 2017 Simone Kermes founded her own orchestra, “Kermes e Amici Veneziani”, based on her many years of experience with her musicians. To her it was a necessity to “experience and bring together quality and humanity, and to carry it on.” Simone Kermes successfully teaches master courses all over the world. Fostering young talent and passing on her own musical knowledge and experience ­– all that is near and dear to the soprano’s heart.