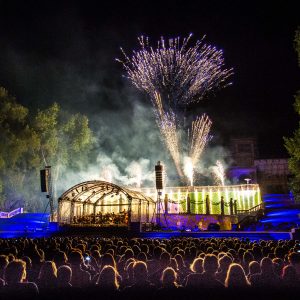 The Music Festival Potsdam Sanssouci succeeded the Park Festival Sanssouci, which had been held as of 1954. Having initially been developed for an inter-German youth gathering in Park Sanssouci, the Park Festival quickly became an annual cultural highlight in the GDR. Soon after the two German states were reunited the festival was given a new profile. 1991 saw its first staging with a new artistic concept and a new name under the artistic direction of Dr. Andrea Palent. Since 2000 the non-profit limited company has also been running the Nikolaisaal, the Capital City of Potsdam’s concert and event venue.

The Music Festival Potsdam Sanssouci has been enjoying the privilege of performing in a truly unique cultural landscape since 1991. Outstanding architects such as Schinkel, Persius or Stüler and landscape creators such as Lenné or the “green duke” of Pückler Muskau did not only create palaces and gardens for Prussian kings, they also included the landscape, which in any case was pleasant given its Havel lakes, in their designs. Whether in Park Sanssouci with Frederic II’s world-famous vineyard palace and the New Palace, the terrace layout of the Orangery Palace or the intimate New Chambers, in the New Garden with the Marble Palace and The Palm Hall or in the romantic-neogothic setting of Babelsberg Palace and its Park – palaces and gardens are revived everywhere and concert as well as opera experiences are effortlessly combined with a leisurely countryside stroll.

Special formats such as promenading concerts, musical walks or the bicycle concert make for a particularly intensive experience of the historical venues; specially themed guided tours conclude the range. The Music Festival is committed to historically informed performances: apart from the crème de la crème of early music, the most exciting young European ensemble always visit and present their innovative concepts. Yet a great variety of styles and eras (even within a single concert) is part of the program: it always features not only early music but also both classical and Romantic pieces as well as contemporary music. The Sanssouci Jazz Night in the historical setting has become a tradition as has the closing Sanssouci Prom Concert with fireworks. Musical Theatre plays another key role with annual in-house as well as international co-productions: many a baroque jewel has been staged in the Rococo Theatre of the New Palace, the Plant Hall of the Orangery Sanssouci or the historical Hedge Theatre. All in all: a summer music festival set in the UNESCO world heritage sorroundings and only made possible by closely collaborating with the Prussian Palaces and Gardens Foundation Berlin-Brandenburg.